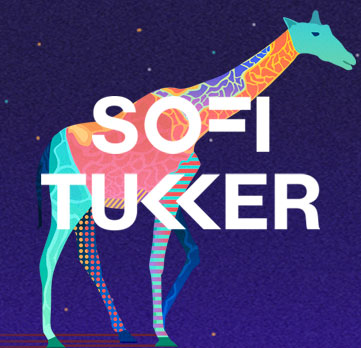 For New York duo SOFI TUKKER, comprised of Sophie Hawley-Weld and Tucker Halpern, these words are not just a guiding life principle, but how they measure the music they create. SOFI TUKKER’s “holy trinity,” as they describe it, is movement, community, and joy.

In early 2016, the band released their debut EP, Soft Animals. The record has truly been embraced globally, charting in over 20 countries, with their hit single, ‘Drinkee’, earning them a 2017 Grammy nomination for ‘Best Dance Recording’. The EP holds a number of surprises, and displays how the duo have created one of the most unique sounds the music community has heard in years – a heady cocktail that blends global instrumentation with modern technology, while sounding anything but machine-made.

In recent times, SOFI TUKKER have been hard at work putting together a live show, which combines their unique personalities, instrumental skills, and need to get a room full of people dancing. In their short live career, they have already headlined shows in a dozen countries, toured supporting M83 and St. Lucia, and graced festival stages in Europe and North America.

Join SOFI TUKKER as they make their Australian debut this February.

TICKETS ON SALE NOW FROM MOSHTIX